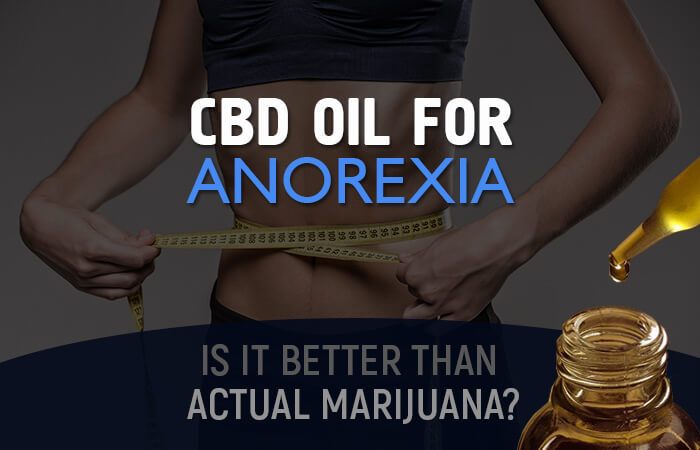 CBD Oil for Anorexia [Why it Can Work]

Anorexia is a condition you hear a lot about, but probably don’t understand very well; if you’re describing someone particularly thin as being “anorexic” or reading in some awful fashion magazine that recommends it as a method of maintaining an ideal weight, you likely have a very skewed view of what the condition is.

In fact, Anorexia Nervosa is a serious psychiatric disorder that affects not only the sufferer’s physical state, but their mental and psychological wellbeing as well.

Obviously, the common recommended cure for anorexia nervosa is to just eat more, but that simply doesn’t help when the problem exists in your mind and as a result of self image.
There are a lot of drugs and therapy out there to try and treat anorexia nervosa, but there is one thing a lot of people have yet to try.

Could we be using CBD oil as a method for treating anorexia?

First of all, anorexia is a lot more than you think it is. Erase that image of a 19-year-old girl who doesn’t like to eat a lot – that’s a figment of badly educated media.

Anorexia is an eating disorder and thus a psychiatric disorder. When someone is suffering from anorexia, they strive to keep their weight as low as possible through either under-eating or over-exercising.

It isn’t a simple dietary issue either; anorexia has the highest mortality rate out of all psychiatric disorders, causing sufferers of the condition to starve to death due to their own self image.
That key phrase, self image, is the main component of what constitutes anorexia. Most people don’t understand that it isn’t just wanting to be thin, it’s an actual psychological compulsion.
People with anorexia see themselves differently to how a healthy person does. When they look in a mirror, they don’t see their actual weight, but instead they see themselves as something repulsive and unsatisfactory. Their desire to improve themselves, in their eyes, comes from a distorted sense of self worth.

However, it’s possible that CBD oil might help those that suffer from anorexia.

What’s the Fuss Around CBD Oil?

CBD is the non-psychoactive component of Cannabis Sativa, the infamous plant that is known to get users high. Except actually, it doesn’t necessarily have this effect. THC is the component of marijuana that causes the high – CBD doesn’t do anything of the sort.

In fact, CBD has a number of useful medical properties. CBD works alongside THC to help make you healthier, as well as counteract some of the undesirable effects of THC*.

CBD, once you imbibe it, works with the endocannabinoid system, the system that exists throughout the body and helps regulate a variety of functions, including cellular regrowth and the release of brain chemicals. CBD interacts with the CB1 and CB2 receptors, which encourage the body to heal itself naturally by convincing you that everything is okay, so there’s no need for the body to punish itself with inflammation or pain.

However, how could CBD possible help those with anorexia? Anorexia exists in the mind, so how could the endocannabinoid system play a role?

When CBD enters your body and interacts with your CB1 and CB2 receptors, it triggers a variety of different effects in your body.

Due to the fact that the endocannabinoid system exists throughout your body – even in your skin! – it can have different effects depending on what you’re going through.

One of the effects CBD has on your body is to increase your appetite. This was demonstrated in a study* conducted by Scherma et al. for the Current Pharmaceutical Design publication.

The researchers discovered that CB1 agonists – the scientific term to describe anything that helps trigger the receptor – possess orexigenic effects, which enhance appetite as well as increasing the actual rewarding value of food. It’s important to remember that a person suffering from anorexia doesn’t just not want to eat food, but they lose the positive association we have when we eat food that nourishes us.

Think back to the last time you were starving and finally ate something nutritious – that pleasant, content feeling was a direct result of having a healthy relationship with food. People with anorexia nervosa lack that feeling.

The CB1 receptor helps trigger this sensation, allowing anorexics to both want to eat more and feel better about eating in the first place.

Anorexia is frequently linked to depression, because when people go through depression they tend to develop other psychological conditions as well.

For women, especially younger women in the western world, this often manifests itself as anorexia.

While this isn’t saying that anorexia is caused by depression, it does mean that people with anorexia frequently also have depression, which only contributes to their low self esteem and, thus, the further progression of their eating disorder.

Due to this, treating depression can help anorexia sufferers overcome their low feelings of self worth.

CBD has been proven by numerous researchers that it can help to treating depression, as demonstrated in one study* by Haj-Dahmane and Shen for the Journal of Neuropharmacology, which discovered that the system in the body that controls the release of serotonin – the principle chemical in your brain that governs how you feel – is partly controlled by the CB1 receptor.

By triggering the CB1 receptor, CBD has the potential to help treat symptoms of depression through ensuring that people are able to more easily experience a healthy amount of serotonin release.

This lack of serotonin is one of the principle symptoms of depression, and thus one of the prime reasons for the feelings of apathy and general poor mood associated with the condition.

This also has the benefit of not having the uncomfortable symptoms that antidepressants often give the depressed person, such as the infamous “leveling out” of emotions, meaning that the patient is unable to experience extreme highs or extreme lows of emotion.

Finally, one of the other main contributing factors towards anorexia is the feeling of anxiety.

Anxiety is that difficult to describe sensation of being overwhelmed by life’s everyday moments and choices. This anxiety can manifest itself in a number of ways, but for anorexic people, their anxieties are linked to their self image and their body.

By treating anxiety, it is possible to help treat this symptom of a person’s anorexia as well.

Various studies have been made for the purpose of exploring the anti-olytic – that means helping to stop anxiety – effects of CBD. One famous study* conducted by Zone et al. found that CBD worked to reduce the amount of stress and anxiety suffered in lab animals. By dosing them with varying levels of CBD, researchers were able to prove that CBD helps reduce stress and anxiety levels due to the rat’s responses to a variety of stressful stimuli.

Alongside this, an additional study* by Crippa et al. found that, when people dose themselves with marijuana to deal with anxiety, it is actually the CBD – not the THC – that provides them with the anti-olytic effects.

Final Thoughts on CBD for Anorexia

CBD is one of those medications that works in a variety of ways, delivering a variety of effects. It is also extremely subjective, meaning that for one it may work while for another it might not.

Instead of being an artificial substance that changes your body chemistry in possibly hazardous ways, CBD works to simply speed up or rectify issues within the human body by using the already-in-place endocannabinoid system.

This means it could help treat those conditions that are principally caused by something going wrong in the human body.

In the case of anorexia, though we don’t have a definitive cure for the condition itself (due to the fact that it’s a psychiatric disorder and it is rather difficult to just medicate it away entirely) we can help treat the issues that lead towards anorexia, such as the lack of appetite and the loss of positive association with food.

Perhaps even more importantly, we can help treat depression and anxiety, two of the most commonly associated psychological conditions.

By using CBD, it’s possible that you can help treat anorexia by treating all the various conditions surrounding it, making it a lot easier for the sufferer to get better.

It might not cure the disorder entirely, but it can help to make that first step.