CBD Oil for Depression: How Useful Is it?

Unfortunately, mental illness still carries a stigma. If you have depression or another similar disorder, one of the concerns is how others will perceive you. With the side effects caused by some anti-depressants, there is a trend towards using CBD for depression. If you have the condition, it is essential to remember that you’re not alone.

Back in 2017, the World Health Organization (WHO) suggested that around 300 million people have the condition globally. The National Survey on Drug Use and Health revealed that 17.3 million American adults experienced a ‘depressive episode’ at least once in the past year. Approximately half of all adults with depression also receive an anxiety disorder diagnosis.

The CBD oil depression phenomenon is partly down to side effects from using traditional medication. Others use CBD oil for depression because they believe it really helps. Let’s explore the truth in this article.

The word ‘depression’ is often incorrectly used to describe an array of symptoms such as irritability and sadness. However, severe depression only occurs when symptoms reach a certain threshold. You enter the zone of clinical depression when your level of distress negatively impacts daily functioning. Many people feel ‘down’ or sad, but they can still perform everyday tasks.

When you are depressed, you experience diminished interest in things you used to like. It takes a stranglehold, and you require help to get through it. If left untreated, a major depressive disorder could cause an individual to consider suicide.

The Types of Depression

Depression comes in many forms, and most researchers divide it into seven types.

This is typically the term given to clinical depression. This mood disorder features symptoms such as fatigue, changes in sleep patterns, and feelings of guilt and worthlessness. You are diagnosed with MDD if you have most symptoms for at least two weeks.

Also known as dysthymia, PDD is a form of chronic depression. You receive a diagnosis of PDD if you have symptoms more often than you don’t over two years. These symptoms include low self-esteem, anger & irritability, and lack of energy. There are brief periods when you feel ‘okay.’ However, this relief seldom lasts for more than a few weeks.

This disorder includes spells of abnormally heightened mood called ‘mania.’ Mild spells are called hypomania. Severe periods can impact your sense of reality, or require a visit to a hospital. Symptoms include unexplained aches, hopelessness, and indecision. People with bipolar disorder are 15 times more likely to commit suicide than the general population.

PPD occurs after giving birth to a child. While the ‘baby blues’ is standard for up to two weeks after birth, PPD persists. Symptoms include severe mood swings, social withdrawal, and thoughts of suicide. The condition can last for at least 12 months if left untreated.

The symptoms of PMDD are similar to those of post menstrual syndrome (PMS). These include food cravings, extreme fatigue, and feelings of stress. If you have PMDD, however, you feel far more irritable and experience more significant mood swings than someone with PMS.

SAD impacts people severely during the winter period. Experts believe you get SAD due to the triggering of a disturbance in your normal circadian rhythm. Light entering the eyes impacts the rhythm. Therefore, a seasonal variation in a day/night pattern causes issues leading to depression. Believe it or not, light therapy is a relatively effective form of treatment.

This condition involves experiencing the usual signs of depression, such as weight gain and excessive sleep. However, individuals with this issue feel much better when faced with a positive event. Other symptoms include extreme sensitivity to rejection and strongly reactive moods.

The National Institute of Mental Health lists a long line of possible symptoms of depression. They vary depending on the ‘type’ of depression. However, you potentially have a form of the condition if you experience some of the following almost daily for at least 14 days:

Another issue with depression diagnosis is that there are so many potential causes. Here is a brief overview:

Pharmacological treatment, such as the use of antidepressants is a standard therapeutic method. There are several pharmaceutical options including:

It takes patience and time to find the right drug for you. There is a decent chance that one which works for a family member is effective on you. Beware the numerous side effects associated with antidepressants in particular. Stopping them abruptly can lead to severe headaches, nausea, and vomiting. Individuals under the age of 25 are at greatest risk of suicidal thoughts during the first few weeks on antidepressants.

There are also seven recognized forms of psychotherapy:

Other options include Electroconvulsive Therapy (ECT) and Transcranial Magnetic Stimulation (TMS). Both are usually for patients that do not respond well to antidepressants. CBD for depression is emerging as a way to manage the symptoms of the condition.

There is a suggestion that CBD has an antidepressant effect due to its positive impact on the brain’s serotonin receptors. There is a link between low levels of serotonin and depression. While CBD doesn’t directly increase serotonin, it can impact how the brain’s chemical receptors react to the serotonin already in your system.

A study by Crippa et al., published in Frontiers in Immunology in 2018, looked at cannabidiol’s ability to help patients with specific clinical conditions. The researchers found that the compound has neuroprotective and antipsychotic properties. It also mentioned CBD for depression, along with bipolar disorder, PTSD, and schizophrenia.

A study by Viar Fogaca et al., published in Current Neuropharmacology in May 2013, looked at a possible link between cannabinoids, neurogenesis, and antidepressants. The researchers suggested that cannabinoids could regulate anxiety and depressive symptoms similarly to antidepressants.

A study by Sales et al., published in Molecular Neurobiology in February 2019, investigated CBD’s possible antidepressant effects. The test subjects on this occasion were Swiss mice. The researchers found that a single dose of CBD dose-dependently induced an antidepressant-like effect in the mice. The effect lasted for up to seven days after treatment and impacted the mice quickly.

Be wary when using CBD oil and SSRIs together. Cannabidiol inhibits the system that metabolizes a lot of SSRIs and tricyclic antidepressants. In theory, CBD could interfere with how your body metabolizes certain medications.

How to Use CBD for Depression

The dose depends on a variety of factors, including your weight and rate of metabolism. The most sensible course of action is to begin with a small dose and work your way up. There are also several methods of consumption:

There is some concern about an industry that remains unregulated. When purchasing CBD for depression, stick with the tried and trusted brands we feature at Natural Wellness. Do not consider doing business with any company that doesn’t provide third-party lab reports. We have heard disturbing stories about CBD products that don’t contain the listed level of cannabinoids.

If you have an MMJ card, you can purchase CBD derived from marijuana. Otherwise, stick with cannabidiol from hemp that contains a maximum of 0.3% THC. There are limited studies on CBD oil for depression present. However, the legalization of hemp cultivation may help researchers receive more funding soon. Research to date suggests that cannabidiol is safe to use with a handful of non-serious side effects. It will take many years for us to learn more, however.

Article Sources:
The May Also Like
CBD & Insomnia – Can This Cannabinoid Help You Sleep?

It seems as if we slept more in the ‘good old days.’ Research suggests that, on average, we slept at least one hour more each night back in the 1950s. These days, an estimated 25% of Americans experience acute insomnia annually. Approximately 75% recover without developing chronic insomnia or poor sleep. The sale of sleeping […]

Dementia is an umbrella term used to describe a range of debilitating symptoms that can affect memory, language, mood, and behavior. It impacts over 7 million Americans every year, and while commonly misunderstood to be a condition in itself, dementia is merely the term used to represent many different common symptoms. The most well-known form […]

0
CBD Oil for Anorexia [Why it Can Work]

Anorexia is a condition you hear a lot about, but probably don’t understand very well; if you’re describing someone particularly thin as being “anorexic” or reading in some awful fashion magazine that recommends it as a method of maintaining an ideal weight, you likely have a very skewed view of what the condition is. In […]

According to the Glaucoma Research Foundation, there are an estimated three million people in America suffering from Glaucoma, and half of them aren’t even aware of their issue. It’s one of the leading causes of blindness in the U.S.; 10% of patients with this condition experience vision loss – even if they get the proper […]

Getting old is a part of life. As we grow older we start to change; our bodies don’t work quite as well as before. New creaks and pains spring up in areas you didn’t even know you had and, of course, you will start to see wrinkles appearing in your previously lush and lovely face. […]

Irritable Bowel Syndrome (IBS) is a disorder that you may have heard about, but if you’re lucky would never have experienced it for yourself. It is believed to affect between 25 and 45 million people in the United States. IBS is a very common condition that can have a significant impact on the lives of […]

Customer Reviews Based on 4 reviews 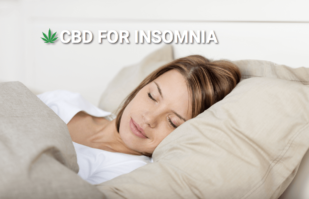 CBD & Insomnia – Can This Cannabinoid Help You Sleep?

CBD for Epilepsy – What Can It Do?