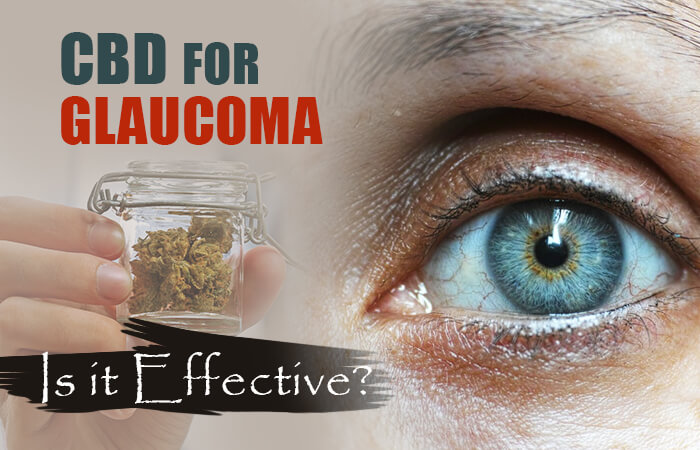 According to the Glaucoma Research Foundation, there are an estimated three million people in America suffering from Glaucoma, and half of them aren’t even aware of their issue. It’s one of the leading causes of blindness in the US; 10% of patients with this condition experience vision loss – even if they get the proper treatment.

So, could CBD be the remedy that everyone has been waiting for? CBD, a component of marijuana, is being increasingly hailed as an alternative treatment for a variety of health issues. Not that long ago, many people believed that CBD oil for glaucoma was a viable treatment option. But unfortunately, in recent times, eye doctors are advising patients not to use CBD as a remedy for glaucoma.

Essentially, there’s a lot of conflicting information regarding the use of CBD for glaucoma. In this article, we will take a closer look at Glaucoma and its’ possible treatment options, including CBD eye drops.

Glaucoma is a medical ailment that damages the eye’s optic nerve. This is the nerve that transmits visual information to the brain and allows us to see. Often, it’s linked to a buildup of pressure inside the eye and is a condition that gets worse over time. Glaucoma is a leading cause of blindness for people over the age of 60. While it can occur at any age, it’s more common in older adults.

There are a few types of glaucoma; the two most common are primary open-angle glaucoma (POAG) and angle-closure glaucoma (ACG). Open-angle glaucoma is known as the “sneak thief of sight” because it doesn’t present any symptoms until significant vision loss has occurred.

Glaucoma vision damage is a real possibility. Shockingly, glaucoma is the leading cause of irreversible blindness in the world.

One of the main causes of glaucoma is optic nerve damage. As the nerve gradually deteriorates, blind spots start to develop in one’s visual field. For reasons that aren’t fully understood by doctors, this nerve damage is typically related to an increase in eye pressure.

Elevated eye pressure is the result of a buildup in fluid (aqueous humor) that flows all throughout the inside of the eye. Normally, the internal fluid drains out through a tissue known as the trabecular meshwork at the angle where the cornea meets the iris.

When the drainage system doesn’t work properly, or when fluid is overproduced, it’s unable to flow out at its normal rate, and therefore eye pressure increases.

Less common causes include severe eye infection, inflammatory conditions, blunt or chemical injury to the eye, and blocked blood vessels inside the eye. Usually, it occurs in both eyes, but it may be worse in one than the other.

Glaucoma often runs in families. In some cases, scientists have identified genes in people related to glaucoma optic nerve damage and high eye pressure. Typically, it affects adults over 40-years, but children, young adults, and even infants can also get it. African Americans tend to get glaucoma more often when they are younger, and they experience more vision loss.

There are several types of glaucoma. Each type is different, but most don’t have any early symptoms. We will go into a bit more detail on each below:

Most people who have this condition don’t experience any pain or early signs of glaucoma. The most common form of glaucoma has no warning signs and will only be detected during a comprehensive eye exam. The effect is so gradual that patients often won’t notice a change in their vision until the condition is at an advanced stage.

If undetected and untreated, you will first experience peripheral vision loss and may eventually become blind. By the time you notice any vision loss, it’s too late. The lost vision cannot be restored, and it’s highly likely that you will experience additional vision loss even after treatment begins.

Since vision loss caused by glaucoma can’t be recovered, you should schedule regular eye exams with your eye doctor. They should take measurements of your eye pressure to ensure that a diagnosis can be made in the early stages and treated appropriately.

Ultimately, there are very few, if any, warning signs of glaucoma. But if recognized early, vision loss can be prevented or at least slowed.

Depending on your situation and what type of condition you have, treatment for glaucoma options may include oral medications, eye drops, laser surgery, or microsurgery to lower the pressure in the eye.

Currently, there is no glaucoma cure when it comes to vision loss. Existing treatments can slow the process for most patients to ensure that no meaningful vision loss occurs in their lifetime.

Several types of glaucoma treatment involve surgery to try to fix the issue. But, eye drops are the most commonly prescribed option for open-angle glaucoma. There are a variety of medicated eye drops formulated specifically to treat the condition. These include beta-blockers, cholinergic agents, prostaglandin analogues, and carbonic anhydrase inhibitors.

Typically, these medications work in different ways. For instance, beta-blockers work by decreasing fluid production that leads to increased IOP. Prostaglandin analogues, on the other hand, increase the outflow of fluid from the eye.

So what about CBD and Glaucoma?

If you were hoping that CBD oil would offer a natural remedy for glaucoma, the latest research is not good. As we already mentioned, a new study has found that CBD doesn’t lower the eye pressure – instead, it raises it.

As part of the study, researchers from Indiana tested eye drops that contained CBD on rats. They discovered that it raised the pressure inside the eye by 18% for at least four hours after the drops were administered. They also tested THC, and interestingly, the eye drops that only contained THC decreased eye pressure by up to 30% within eight hours.

What does this mean? Well, it seems as though CBD oil and glaucoma may not be the remedy that many had hoped for. However, patients may be able to use marijuana for glaucoma, since THC is a key component of marijuana and has shown promise for its ability to decrease eye pressure.

The problem is that THC is psychoactive, meaning that it makes users high. For this reason, many patients are immediately put off by glaucoma marijuana treatments.

Although CBD oil and glaucoma aren’t the perfect combination, CBD may be able to help in other ways. Many glaucoma patients suffer from unexpected and uncomfortable symptoms such as nausea, vomiting, and severe pain. CBD products contain anti-nausea and analgesic properties, which may help to relieve these symptoms.

In addition, some studies have found that CBD could relieve intraocular pressure in the eye, and thus alleviate symptoms and reduce damages.

Generally, glaucoma harms the eye due to the excessive release of a damaging chemical called glutamate. This leads to the death of neurons in the retinal after peroxynitrite has formed. Some scientific research has claimed that CBD can help to prevent the formation of peroxynitrite. As a result, it provides ultimate protection for the neuron nerves from glutamate-induced cell death.

There’s no doubt that a lot more research needs to be done on using CBD oil for glaucoma. The latest studies suggest that CBD could worsen the condition rather than treat it. However, some studies have found that CBD products, like CBD eye drops, could be beneficial in relieving several of the symptoms associated with glaucoma.

It’s safe to say that the research out there is conflicting. What we can report is that many patients have reported positive results when using marijuana for glaucoma relief. But this isn’t a viable option for everyone because THC (prominent in marijuana) is intoxicating and makes users high. We hope to see more research in the near future.

What type of CBD OIL would you recommend to treat glaucoma?

I have developed glaucoma very recently, and one of my colleagues referred me to your website so as to gather an overview and general information about it. I think you people have done a good job for new patients like me, and I was too worried earlier, now my tension has come down a bit.

I am an eye doc, and I can say off the record that CBD helps Glaucoma. Many patients comment positively about this, and now, after a few years, I myself am telling my patients that they can go for it, although I do not write it in the prescription slip, as it is still under research. So a pure personal call I would say.

CBD for glaucoma was fine to me until I started smoking weed. And believe me it is much better than CBD, if it is glaucoma under consideration. Just get an MMJ card, and your life would be much easier.

We use cookies to ensure the best user experience. If you continue to use this site we assume that you are happy with it. Read more