Better known as IBS, Irritable Bowel Syndrome is America’s most common functional gastrointestinal disorder. It is a condition that is often underdiagnosed, because people with symptoms routinely fail to seek medical attention. In fact, as little as 30% of sufferers seek a consultation with a physician. As a result, the prevalence of the condition could range from 10% to 25% of the adult population. It is a condition responsible for at least $1.6 billion per annum in healthcare spending and its symptoms range from embarrassing to excruciating

What is Irritable Bowel Syndrome (IBS)?

It is a disorder that affects your large intestine. It is anywhere from 50% to 200% more common in women than men, with working females most likely to suffer from IBS. An estimated 50% of people experience initial symptoms before the age of 35, with most people experiencing IBS symptoms between the ages of 25 and 54.

There are a number of possible reasons why people get IBS, including:

Risk factors and triggers include:

On average, people with IBS experience symptoms such as pain for around eight days a month. 12 months after diagnosis, an average of 30-45% of patients will have prolonged ‘symptom-free’ periods. Individuals with IBS take almost twice as many days off as the national average.

What Are IBS’ Traditional Treatments & Their Side Effects?

Once you have been diagnosed with IBS, the next step is to embark on some lifestyle changes. Your physician will probably advise you to eliminate caffeine, alcohol, raw fruit, and vegetables (such as cauliflower and broccoli) from your diet. There is research which suggests that IBS sufferers show improvement when they eat a gluten-free diet.
As well as providing patients with laxatives, pain medications and antidepressants, physicians prescribe specific IBS drugs. The problem is, they come with a lot of side effects:

As always, the hunt is on for medication that works but doesn’t carry nasty side effects. Perhaps CBD fits the bill?

Research has shown that cannabinoids such as CBD play a major neuromodulatory role in our GI system. CBD activates the cannabinoid receptors in our body. The result is a reduction in gastrointestinal fluid secretion and inflammation. It is also possible that CBD’s analgesic and antiemetic effects can ease the suffering of IBS patients. We know that IBS’ pain is promoted by GI, spinal and peripheral mechanisms, but CBD is capable of blocking them.

CBD acts as an agonist on the cannabinoid receptors within our digestive tract. Although it acts indirectly on these receptors, it relieves the pain and spasms associated with IBS and can result in better mobility. Indeed, CBD has been used to treat GI disorders for at least a century in Western and Eastern medicine.

A 2013 review* by Esposito et al. suggested that CBD was “a promising drug for the therapy of inflammatory bowel diseases”. A 2011 study* by De Filippis et al., published in PLoS One, found that CBD reduced intestinal inflammation via the control of the neuroimmune axis.

A 2015 survey* conducted by Care By Design looked at 2,495 patients who used medical marijuana for over 30 days. 100% of patients with IBS, migraines, spinal cord injury, or fibromyalgia reported a decrease in their pain or discomfort levels.

Studies have found that CBD is capable of relieving numerous symptoms associated with IBS such as cramping & diarrhea, abdominal pain, and even depression. Individuals with IBS often feel embarrassed by the unpredictable and spontaneous instances of diarrhea and cramping they experience. The result is an urgent need to use the bathroom. As it happens, the cramping is caused by hypermotility which is a term used to explain when food moves too quickly through your digestive tract.

A healthy GI tract will expand and contract in a perfectly timed movement that helps process food more slowly from one end to the other. If you have IBS, the timing is off, which means food moves way too fast. The disruption of the timing means you will suffer from loose stools and cramping. Studies have shown that consuming CBD can relax the cramping and help your digestive system return to normal.

This is a relatively new strain that is named after a young girl and has a 34:1 CBD:THC ratio, making it one of the strongest cannabidiol strains in the world.

This is another exceptional CBD strain and contains around 18% cannabidiol against 1% THC. Although it has an extremely low level of the psychoactive compound, there’s a small chance you can experience at least a sense of euphoria if you use enough.

This strain was created by the Stanley Brothers of Colorado and famously helped reduce the seizures of Charlotte Figi from hundreds a week to a couple per month. Its THC content is as low as 0.1%, while its CBD level can be up to 17%, meaning you won’t experience a ‘high’. However, you should benefit from an energy boost, and most users say their mood improves after using CW.

This marijuana strain has won numerous Cannabis Cup awards and is one of the most sought-after medical weed strains on the market. Its CBD content of up to 24% will counteract the 6% THC, but you should feel clear-headed after use.

With a CBD:THC ratio ranging from 5:2 to 1:1, Harlequin is not for kids! That said, it certainly can help your IBS while ensuring you remain 100% functional throughout the day. Users say it helps them feel creative and productive, but be careful when using as it is fairly strong.

Although the medical efficacy of CBD is still the subject of intense debate, an increasing number of studies suggest it could be useful in the treatment of IBS symptoms. If you have irritable bowel syndrome and are struggling to cope with the pain, perhaps CBD is the answer.

If you have used several different prescription medications and find that nothing is working, it is worth trying CBD since it is legal in most states, as long as it comes from industrial hemp and contains a minuscule amount of THC. Don’t allow IBS to take over, or ruin, your life – take back control of your gastrointestinal system with the aid of cannabidiol!

Article Sources:
The May Also Like
CBD for Insomnia [Explore Which Oils Work]

If you toss and turn for what seems like hours in a futile attempt to sleep, you’re not alone. According to the Better Sleep Guide, approximately 30% of the American population suffers from insomnia. Almost half the population loses sleep due to stress and anxiety, and we sleep 20% less on average than people 100 […]

It’s estimated that there are currently at least 2.1 million people worldwide who suffer from Multiple Sclerosis (MS). Interesting to note, it’s thought to be the most frequent chronic neurological disease among young adults in northern industrialized countries. There is currently no known cure for MS, and its symptoms range from severe pain, spasticity (feelings […] 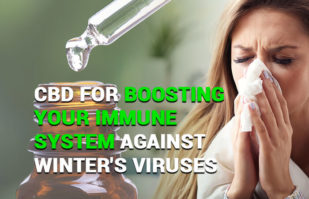 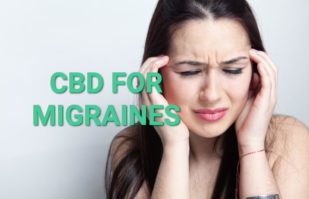 What Are Terpenes? [Answered]