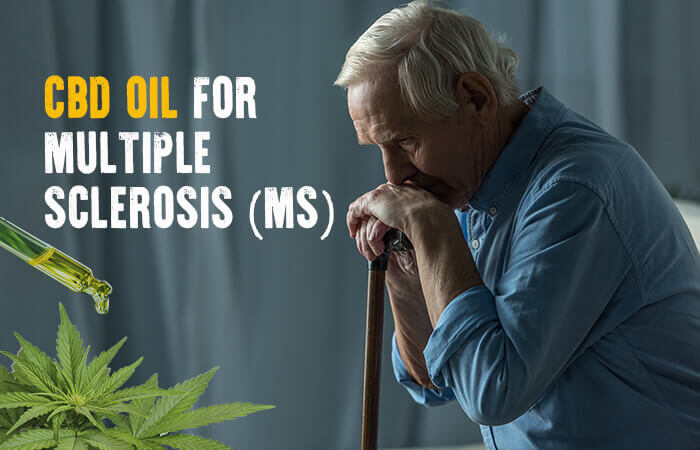 It’s estimated that there are currently at least 2.1 million people worldwide who suffer from Multiple Sclerosis (MS). Interesting to note, it’s thought to be the most frequent chronic neurological disease among young adults in northern industrialized countries. There is currently no known cure for MS, and its symptoms range from severe pain, spasticity (feelings of muscle spasms), fatigue, and bowel and bladder problems, as well as cognitive changes, among other things.

Since Multiple Sclerosis is such a debilitating disease, there is an urgent need for effective and safe therapies to combat MS or perhaps even reverse the illness. While there are treatment options that address symptoms of MS, there is no therapy to slow down or stop progressive MS. There is no “big pharma” medicine that can cure this disease.

However, initial research programs have shown promising results in CBD oil for MS. Because of the neuroprotective structure-functions of CBD oil, it has raised the attention of pharmacological researchers. Studies dating back to the 1940s have looked into the efficacy of CBD compounds, and have found that CBD can reduce anxiety, boost immunity, provide relief from sleep disorders, calm the central nervous system, and reduce inflammation and chronic pain, among other things. In this article, we will take a look at how CBD oil can help with Multiple Sclerosis.

What is Multiple Sclerosis?

Multiple Sclerosis, commonly referred to as MS, is a serious autoimmune disease that affects the central nervous system, which consists of the spinal cord and brain. It’s not known what causes MS, but studies have shown that the immune system attacks the spinal cord and brain, disrupting the signals that run to and from the brain. Ultimately, the covering that insulates the nerve cell complexes in the spinal cord and brain are damaged, and this results in dysfunctional feedback and communication between neurons. The symptoms of MS are expressed both mentally and physically.

In the early stages of MS, the symptoms may come and go, with progression towards more advanced conditions that permanently damage neurons. Since the central nervous system controls everything that we do, MS causes unpredictable symptoms.

Ultimately, Multiple Sclerosis is a long-lasting illness that can affect the spinal cord, brain, and the optic nerves in your eyes. It may cause problems with balance, muscle control, vision, and other basic body functions. The effects are typically different for everyone who suffers from the disease. While some people may have mild symptoms and don’t need treatment, others could have problems getting around and engaging in daily tasks.

MS occurs in cases where the immune system attacks a fatty material known as myelin, which is wrapped around the nerve fibers to protect them. Without the outer shell, the nerves become damaged, and scar tissue might form. This damage means that the brain can’t send signals correctly through the body. The nerves also don’t work as they should to help you feel and move. Common symptoms of MS include:

How CBD oil helps with MS

CBD oil has been known to impact MS in a variety of ways, some of which are not yet fully understood. It can bring much-needed relief via the reduction of inflammation, as well as relief from symptoms like muscle spasms and spasticity, insomnia, and neuropathic pain. While some strains of marijuana are more highly recommended for people with MS than others; the key is to find strains that have a high CBD concentration.

Here are a few of the main ways that CBD oil can help with MS:

It can help to protect the brain

One of the major symptoms that MS patients face is inflammation. When immune cells are activated, they release proinflammatory proteins known as cytokines. These are what cause significant inflammation in the brain. Essentially, this results in the destruction of neurons, and symptoms that are progressively worsening. CBD is one of the most potent anti-inflammatories found in cannabis. It deactivates the immune system, which halts the violent assault on the central nervous system. Once the immune system is calmed down, it won’t attack the central nervous system.

It is though to stop muscle spasms and stiffness

In a study done at Israel’s Tel Aviv University (which we will discuss in more detail later on), CBD helped paralyzed mice to regain their ability to walk. After being injected with CBD, the mice whose legs were locked stiff with crippling muscle tightness started to move again. These mice also had significantly less damage to their nerve cells and less inflammation overall.

It may help you sleep

When you suffer from a condition like MS, your body is out of your control and sleeping can be a daunting challenge. If you need some quality sleep, CBD oil will put your mind and body to rest. A study conducted by British GW pharmaceuticals tested the effects of THC and CBD on 2000 patients who were experiencing pain. The study reported that participants experienced better quality sleep and less pain.

It is though to help to ease pain

CBD is a potent analgesic that engages pain receptors in the body. The ability of CBD to reverse inflammation also plays a role, since pain and inflammation go hand-in-hand. As the tissues in the body begin to swell up and become irritated, they deteriorate. The deterioration of these tissues is painful, and also, nerve cells could send pain signals out the rest of body as they are destroyed.

What the research says about CBD oil and Multiple Sclerosis

When it comes to the condition of MS, cannabidiol (CBD) is thought to protect the nervous system. A study* published in the Journal of Neuroimmune Pharmacology and reported by Medical News Today was conducted on mice with MS-type diseases to determine if CBD can prevent inflammation in the spinal cord and brain. Dr. Ewa Kozela from Tel Aviv University explained that inflammation is a part of the natural immune response of the body, but gets out of hand in diseases like MS. His study looked into how CBD could be used to protect the nervous system and how it functions by regulating inflammation. The investigation team targeted immune cells that harm the spinal cord and brain with CBD and THC. In response, the immune cells in paralyzed mice demonstrated less inflammation. More specifically, the interleukin 17 (IL-17) which is closely associated with MS, was reduced. The study concluded that both CBD and THC restrains immune cells from triggering the production of IL-17 and limits the ability of the molecule’s to damage the spinal cord and brain.

Dr. Ewa Kozela and his team also conducted a study back in 2011 that demonstrated that CBD helps with MS-like symptoms in mice by preventing the attack of nerve cells in the spinal cord by immune cells. In this previous study, researchers injected mice that had MS-like conditions and paralyzed limbs with CBD. It was found that, after receiving the CBD, the animals regained movement. They first began twitching their tails and then began to walk without a limp. The researchers reported that mice who had been received CBD had far less inflammation in the spinal cord than their untreated counterparts.

The Tel Aviv University findings are corroborated by additional research. In 2012, a study conducted by the University of Plymouth discovered that cannabis was twice as effective at relieving MS muscle spasms and stiffness when compared to a placebo. 12 weeks after using cannabis, participants showed a significant reduction in spasticity compared to their counterparts.

In another particular study* conducted in 2006, it was noted that findings in the clinical trials were in line with anecdotal data from MS patients who had been self-medicating with cannabis – more specifically, CBD. The study reported that over 90% of patients experienced improvements after using the CBD. For instance, between 81-90% experienced improvement for anxiety, and spasticity when waking in the morning or when walking; another 71-75% experienced improvement for numbness of stomach/chest, leg weakness, weight loss, and face pain; 61-66% said that the CBD helps with tiredness, double vision, and urinary urgency; 51-59% reported improvement in their urinary hesitancy, dimness, ability to walk, and slurred speech.

The use of CBD oil for multiple sclerosis has been spreading at a rapid rate. CBD oil is known for having a calming effect on the nervous system and can help with a number of the symptoms associated with MS. Having said that, CBD oil is not a cure but merely an alternative option to pharmaceutical drugs when it comes to the debilitating effects of MS.

Also, keep in mind that you should consult with a physician if you are currently using any other form of medication. In some cases, pharmaceutical drugs could interact negatively with CBD. However, it’s always great to know that there is yet another disease that CBD oil can help with.

Article Sources:
The May Also Like
CBD Oil for Schizophrenia (Psychosis)

5
Can You Use CBD for PTSD? What Does the Research Say?

Federal marijuana prohibition remains a significant stumbling block in the quest to study the plant in detail. We are mainly reliant on data from research performed overseas. The government allows the University of Mississippi to grow cannabis for research. However, the herb grown there doesn’t resemble what you’ll find in the average licensed dispensary. Until […]

5 Crucial Cannabinoids to Know About