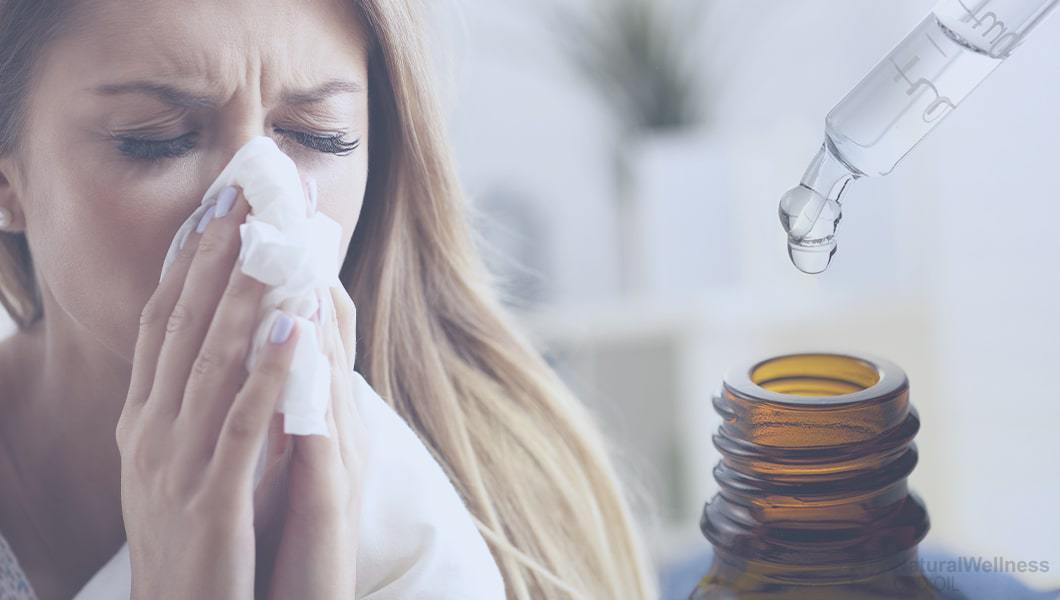 Does CBD Oil Work as an Antihistamine?

Many people are stunned to find out how many of us suffer from an allergy. The American Academy of Allergy Asthma & Immunology (AAAAI) recently released some telling data.

● Globally, Allergic Rhinitis affects anywhere from 10% to 30% of the population.

● Up to 8% of American children have a food allergy.

All told, allergies are a lot more prevalent than you might think. One of the most common methods of treatment is the use of antihistamines. However, not everyone is a fan. This class of drugs carries a few side effects. There is a growing trend towards using CBD oil.

What Is an Antihistamine?

It is a drug or compound used to inhibit the physiological effects of histamine. It is a primary weapon in the fight against allergies. Your body creates chemicals called histamines when it comes into contact with your allergy. Histamines result in the swelling of your nasal tissue. They also cause a runny nose and eyes, and you may find that your mouth, nose, and eyes also itch. Occasionally, you get an itchy rash called hives.

As the name suggests, antihistamines block or reduce histamines. As a result, your allergy symptoms cease. In general, this type of medication relieves various allergies, such as hay fever or food allergies.

You will find antihistamines in various forms, including capsules, liquids, eye drops, and tablets. Popular prescription options include Atarax, Palgic, Optivar, and Xyzal. There are also over-the-counter options like Tavist and Allegra.

Older classes of antihistamines often result in adverse effects such as dizziness, dry mouth, and drowsiness. In some cases, you may feel nauseous and even begin to vomit. If you use a drug that causes drowsiness, save it for when you are getting ready for bed. There is also a possibility that antihistamines interact with other medications. These side effects are leading to the growing usage of CBD oil for allergies.

The Damage Caused by Allergies

For a long time, scientists assumed that allergies were nothing more than a biological mistake. However, some researchers now believe that they are a crucial defense against toxic chemicals. Humankind has known about allergies for millennia. There is a suggestion that an Egyptian Pharaoh named Menes died from a wasp sting over 4,600 years ago!

For many, using CBD oil to combat allergies is not merely a matter of eliminating an inconvenience. Yes, most of the side effects are irritating. However, specific allergies trigger a severe reaction known as anaphylaxis. Symptoms include:

● A sudden drop in blood pressure

● A loss of consciousness

It is also a fact that you’re more likely to have asthma if you also suffer from allergies. If you believe that you have an allergy, visit your physician immediately. They will subject you to a skin or blood test to confirm.

A research study by Fact.MR found that the allergy treatment market was worth $5.5 billion in 2018. Sales of antihistamines alone exceeded $2 billion in that year. It is a remarkable feat given the dubious efficacy of many brand-name drugs.

Can You Use CBD Oil as an Antihistamine?

At the time of writing, there is limited research into marijuana acting as an antihistamine. Remember, cannabis is still classified as a Schedule 1 controlled substance. Therefore, it is federally illegal, and scientists find it tough to perform detailed studies. The good news is that the Farm Bill 2018 legalized industrial hemp cultivation. Soon, we expect to hear more about studies into hemp, CBD oil, and allergies.

To date, there is no evidence that CBD acts as a proper antihistamine. However, it could potentially mimic many of the effects. The result is that the cannabinoid may help relieve many symptoms of allergies. In theory, CBD acts on mast cells similarly to antihistamines. These are the cells responsible for releasing histamines.

Allergy sufferers often find that traditional antihistamines are effective initially. Over time, their efficacy fades to the point of uselessness after a week or so. In this case, steroidal nasal spray comes in handy! Even so, most people don’t enjoy the prospect of using steroids for several months in a year. We don’t yet know whether CBD oil for allergies falls prey to the same law of diminishing returns.

CBD as an Anti-Inflammatory

The 2009 study by Nagarkatti P., published in Future Medicinal Chemistry, is one of the most frequently cited. It looked at whether we could use cannabinoids as anti-inflammatory drugs. The researchers wrote about the importance of the CB1 and CB2 receptors found in the brain and cells of the immune system. It seems as if cannabinoids could play a significant role in regulating the immune system.

Overall, the study stated that “Cannabinoids are potent anti-inflammatory agents.” They discovered that CBD was as effective as many widely available anti-inflammatory medications. Its interaction with the body’s endocannabinoid system (ECS) appears to suppress inflammation.

A 2019 study by Bruni N., published in Molecules, explored cannabinoid delivery systems for pain and inflammation treatment. The researchers reviewed a plethora of investigations into how cannabinoids deal with inflammation. The study said that research shows how the ECS actively participates in the pathophysiology of osteoarthritis-associated joint pain.

The team also said that “preclinical AND clinical data support the potentially effective anti-inflammatory properties of endocannabinoid agonists that target CB2 receptors.” The researchers went on to discuss the different methods of consuming cannabinoids.

Whatever effects CBD has on inflammation appear to boil down to the ECS. A study by Witkamp R. and Meijerink J. looked at how the ECS was an emerging player in inflammation. It was published in Current Opinion in Clinical Nutrition and Metabolic Care in March 2014. The scientists reviewed the evidence to date. They determined that the ECS did, indeed, play a major factor in handling inflammation.

The evidence suggests that proper activation of the ECS helps regulate inflammation in the body associated with many diseases. The ECS helps your body maintain ‘balance’ or homeostasis. It produces natural cannabinoids that regulate a variety of body functions, from mood to inflammation and pain.

When you consume CBD oil for allergies, it works with the ECS to promote the increased production of cannabinoids. Remember, we have built-in CB1 and CB2 receptors (among others). CBD doesn’t directly impact either receptor, but it is relevant enough to promote anti-inflammatory effects.

Can I Use CBD for Hay Fever?

Evidence is mounting but is far from conclusive. Even so, a growing number of people are using CBD oil as an antihistamine. Once the spring makes way for the summer, millions of people around the world dread the phrase ‘high pollen count.’ OTC medications no longer work for a significant percentage of the population.

Research from Eos Scientific found that 24% of the UK population prefers to manage their health with holistic remedies. Recent FDA intervention means that CBD sellers in America must watch their language. Brands can’t say that cannabidiol is a health supplement or cures/treats any condition. This problem isn’t stopping CBD from flying off the shelves.

Unfortunately, the draconian stance of most nations means we have minimal data on whether marijuana makes a useful antihistamine. As things stand, we must rely on animal studies. One such study, by Dudasova A., was published in Pulmonary Pharmacology and Therapeutics in June 2013.

In it, the researchers studied the effect of CBD on antigen-induced guinea pigs. A group of pigs received an antigen to stimulate throat muscle contraction. In case you were wondering, this is a common hay fever symptom. The team found that CBD “reduced ovalbumin-induced airway obstruction.” They concluded that the cannabinoid has potential positive effects when treating obstructive airway disorders.

Small-Howard A.L. had a study published in the Biochemical Journal in 2005. It tried to understand the link between CB1 receptor mediation and mast cells. Remember, mast cells release histamines that cause hay fever symptoms. The results were not conclusive. However, they discovered that CB1 receptors could help mediate the immune system’s hypersensitivity.

Also, activation of CB1 receptors could reduce mast cells’ express rate. The result is potentially lower histamine levels. Alas, the above is about the extent of useful studies into marijuana as an antihistamine.

If you try CBD oil as an antihistamine, let us know if it had a positive effect. We urge you to avoid snake oil salespeople who try to market cannabidiol as a panacea. Early research is promising, but we don’t have enough evidence to suggest that the cannabinoid is entirely effective. It is also illegal to make such claims!

However, if traditional antihistamines don’t work, you will want to try something else. At present, researchers are unable to locate the precise mechanism of action between the body’s CB receptors and histamine production. We badly need human trials to explore this issue further. Until then, people will continue using CBD oil for allergies in the hope that it provides badly-needed relief.

My Royal CBD is on it’s way in the mail and I can’t wait to see if it works! #pleasework

I’ve recently started to have hives a lot and I have found that when I apply cbd oil onto the rash it literally disappears like in an instant.

I was able to stop my seuzure meds for 1982 head injury induced focal seizures. My neurologist cannot prescribe it, of course, but told me they have young patients that don’t get relief from anything else. I was already taking CBD for inflammatory pain and decided to give it a try. Over a period of almost 6 months I slowly cut back the seizure med that gave me awful side effects while taking CBD oil. I have been off the seizure meds for over a year now. I do find that CBD helps with my allergies but I am still… Read more »

I am going to try CBD oil and see what happens, I’ve tried everything else, and I still have hives.